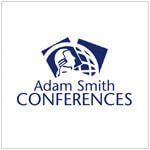 Currently Adam Smith Conferences is the leader in the market of conferences in Russia and the CIS, as well as the leading innovator of the Great Britain in the sphere of market economy. Since 1977 is has played the key role in analysis and development of state policy and published over 300 political researches of significant influence.

The Conferences stood at the origins of privatization in the Great Britain and globally. It allowed to develop many of the methods, which set the standards for turning inefficient state-owned operations into successful private enterprises.

Since 1992 the Adam Smith Conferences  has been developing a range of large-scale industrial forums, which attract thousands of key figures. Many of these events are annual symposiums for industry players, who offer new information about the tendencies of market development , investment opportunities and commercial strategies of success.

The Conferences is an independent non-commercial organization, maintains good relations with political figures of different political parties and enjoys the support of a wide range of companies, foundations and persons.

On July 4, 2008 the Adam Smith Conferences organized the ceremonial opening of the first in the world public statue of Adam Smith – great Scottish economist, philosopher and author of the famous work « the Wealth of Nations».